Where does Stone Island come from ?

1982, Ravirano near Modena in Italy, sportswear is about to undergo a revolution thanks to a Bolognese artist and intellectual: Massimo Osti. But do you know where does Stone Island come from? A look back at the genesis of the brand at the rose of the winds, between functionality, research and development. over the years, Stone Island has established itself as a reference in terms of top-of-the-range sportswear and casual.

A History and a strong brand identity

A canvas as a first start

It all began in the 80's, Mr. Osti worked as a stylist and director for a textile company: CP Company. This company was known for its technological innovations in the sportswear and men's fashion sectors. From this search for innovation, a fabric was born within the company in 1982: the Tella Stella.

This fabric, discovered in the 80's, was originally used for the elaboration of truck tarpaulins and had a different color on each side. The rendering was unique and original, but had difficulty integrating into the business that CP Company was offering.

That's when Osti had an idea, why not use this famous truck tarpaulin for sportswear. He will use this invention to create 7 unique jackets. He will transform this very sturdy canvas by washing and rewashing it dozens of times with pumice stones, in order to be usable. The result, a piece with an aged look and undeniable charm, what more could one ask for? The first collection that appeared in 1983 was inspired by the military style and therefore consisted of seven jackets in this new fabric. Over the years, Stone Island has refined its collection as well as its clothing, which is why in our article How does Stone Island Sweatshirt Fit? we return to this classic brand to guide you in your search.

But Stone Island is not only a technology, it is 'also a strong name.

Stone Island, a name and a logo that originated in literature

A strong identity requires an equally strong name, and it is in the novels of Joseph Conrad (Ukrainian orphan, British naval captain and writer) that she finds it.

STONE ISLAND, words most used by the author. All that remained was to find an emblematic logo: the Rose of the Winds, displayed as a military insignia on the sleeve and symbolizing the love of the sea and the permanent search.

By the way, we've written The Ultimate Guide to the Stone Island Logo to go deeper into the subject!

Research and innovation as a motto

Within its LAB (brand research laboratory), beats the heart of the brand, its research, uninterrupted, in-depth and without limits around the transformation and improvement of textile fibers such as cotton. In their laboratory, technology and fashion are mixed together, the result? Jackets, sweaters, an aged look, technicality, a fleece cotton of a rare softness? In short, a wide range of specificities specific to the label.

Always further, the brand wants to be innovative and shows it to us thanks to its crazy creations; new materials, new production techniques, new ways of dyeing or detour, like using truck tarpaulin to make a jacket. This desire to invent and innovate has been part of the brand's identity since its beginnings.

Translated with www.DeepL.com/Translator (free version) For more information, we invite you to read Stone Island Colorama !

Thus many projects have appeared in the eyes of the world:

But this quest for research and development would never have been possible in the long term without this charismatic man: Carlo Rivetti.

A man as a pillar of the firm's domination

Far from the image of the mad scientist, innovative to innovate, Stone's research has only one objective, quality and practicality. The brand's philosophy is to offer clothes that are more comfortable and functional for men on a daily basis. This desire for innovation is partly due to Carlo Rivetti, the company's current CEO.

In 1983 Carlo R integrates and takes over the management of the company. This entrepreneur in the Italian textile trade and production will buy 50% of the company's capital. A few years later, in the 90s, he will entirely buy the company in order to ensure its durability and to strengthen the brand image.

Carlo quickly grasped the positioning of the brand and its potential. His strength does not only lie in the marketing of clothing but also refers to deep convictions in casual fashion. He will rely on Massimo's vision of fashion, from the technical pieces to the stunning designs.

A collaboration and a crashing entry into fashion

In the mid-1990s, Massimo officially left the label with the famous patch. Mr. Rivetti then found himself with the difficult task of finding a new stylist and art director for Stone.

It is in 1994, that he will make a decisive meeting in a salon in Munich, he discovers the work of Paul Harvey, a British designer who lived in Sant'Arcangelo di Romagna in Italy. During their first meeting Mr. Rivetti will say this :

"I was struck by a strange feeling of familiarity and I exclaimed: This is the Stone of the 21st century! “

It is with Paul Harvey, creator, stylist on behalf of a pop singer, and his functional approach to design, that Stone makes a masterful entry into the 21st century. Trendy and practical collections and an aesthetic that reflects the manufacturing processes, this is what the "British" brought to the brand. After 24 collections designed for the famous Italian brand and 12 years of good and loyal service, in 2008 Paul Harvey decided to end his career as a designer in order to work for the planet.

A break-up causing a major turning point for the company

This is when Carlo Rivetti, the brand's CEO, decided to take an unexpected turn, registering the brand as a contemporary company :

"Times had changed. To become truly contemporary, the company had to be multicultural. I've assembled a creative team. I had the feeling that to see the world in all its aspects, the times required different visions and minds, and that is what defines Stone Island's philosophy to this day. I feel like I'm playing the role of the coach. I choose who to send out on the field depending on the match to be played. "- Carlo Rivetti

Carlo Rivetti was able to restructure the company at the right time by surrounding himself with qualified and competent collaborators allowing an accelerated deployment of the brand. Today this Italian empire created by Mr. Osti represents a turnover of hundreds of millions of euros with 200 million euros of sales realized in 2018, an impressive result. Thanks to this restructuring of Carlo Rivetti, we present you in our article Stone Island FW19 Between Innovation and Heritage, one of the collections that followed its redesign of the brand and at the same time what allowed Stone Island to recover a second wind.

But what really makes the strength of this giant of casual fashion is its fan community. A time relayed to Hooligan's brand, Stone was able to detach himself from this fan base to conquer the men's wardrobe and the world of RAP.

Stone Island and Hooligans, Between Love and Hate

The English Hooligans as a symbol of the Stone Island community

The Italian brand has been enjoying renewed attention in recent years, once confined to the look of the English hooligan, it is now on display on the edge of NBA floors and in the upper echelons of society.

Stone's history is intimately linked to the history of European soccer. As early as 1982 the brand was the official sponsor of the Italian team, and a little later that of the English Hooligans after they discovered it during the 1984 European Championships. It is during the trips against the Italian clubs that the hooligans became acquainted with the Italian label. They looted the luxury stores and hijacked the famous pieces with the patch of the compass rose, the ultimate trophy to bring back to the land of tea. Our article Stone Island and Hooligans, between Love and Hate will tell you more about this.


The brand is also well represented in the movie Green Street Hooligans, a movie inspired by The Football Factory, the reference of this culture, in which we follow the GSE (Green Street Elite) a group of hooligans fan of the club West Ham United. The Trench Coat and the Zip Jacket follow them in the stands as well as in their brawls.

The influence of rap as an actor of diversity and influence

The one who really "mainstreamed" it is none other than Drake himself, wearing the brand on multiple occasions, from tee to tee and even having an ice chain bling Stone Island made, a necklace estimated at $100K as revealed by Highsnobiety in an article. Vince Staples, Travis Scott and A$AP Nast, who claimed to be the first rappers on the East Coast of the United States to have worn Stone, have also contributed to the brand's growth in the eyes of the general public.

We can see Rap Clips appearing that put the "compass rose" in the center of everyone's eyes. The Vince Staples Big Fish clip illustrates this perfectly, but it's also true for some of Drake's clips.


It is this commercial success that allows Stone to be a very high-end technical brand today. Present all over the world, the brand has even opened a 500m² store in Los Angeles, on North La Brea Avenue, the company's largest.

Stone Island, more than a brand a cultural phenomenon 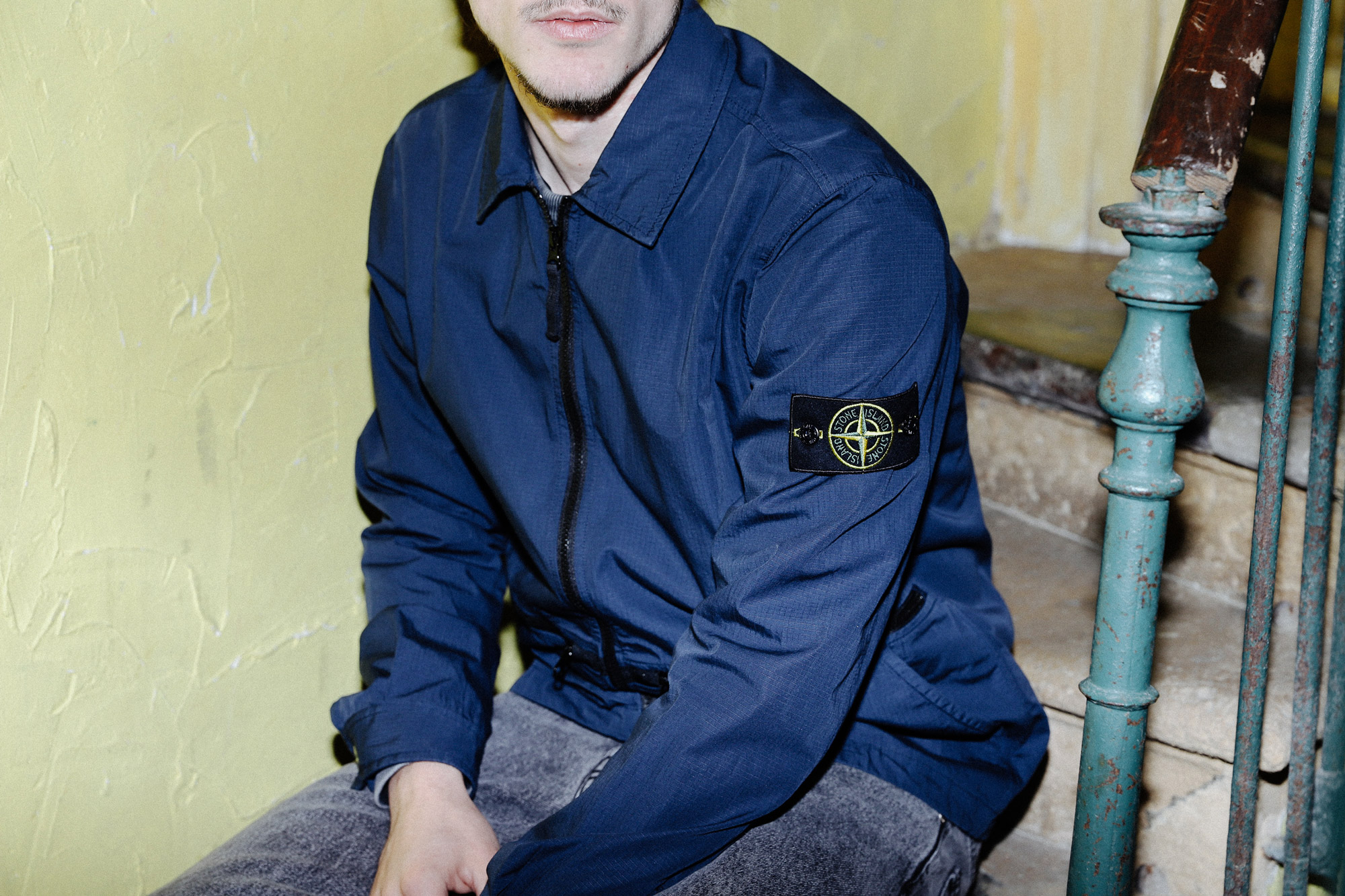 Massimo Osti's brand is a succession of men and ideas that have come at the right time. Sulphurous ambassadors and artists at the top. It is a state of mind, a vision of fashion, an approach to design. A mad scientist making sapes with truck tarpaulins, a visionary understanding the trends and issues of the fashion world, a creator and his vision of "practical" fashion and today an army from the four corners of the globe made up of designers, researchers, dyers

English Casual: A Culture Between Dandy And Hooligans !

When we hear the name of the company, we think of those Hooligans who gather for the matches. So, this leads us to talk about the Casual culture, often assimilated to the English hooliganism, but it is not limited to that, it is a rich culture, passionate people and a real identity.the casual culture was born from a will to break with the previous generations, it is a sport look, but not that, because it is not enough to put on a tracksuit and to say casual, it is well-defined and very strict habits and customs. If you want to find out how to join the casual family, we invite you to learn more in our article English Casual: A Culture Between Dandies and Hooligans, no doubt you will love the values of this style.