The History of Clarks Shoes In Jamaica.

An inextricable link, a passion born a long time ago and which continues nowadays. Because yes, the biggest supporters of Clarks Originals is none other than the island of Jamaica, how and why, you will know by reading our article.

From the origins of streetwear to the Rude Boys movement, through the appropriation by the community, to end with the recognition of the brand itself. A great story is told.

Jamaica the cradle of streetwear

Powerful and unique, the Jamaican culture tells the story of a cosmopolitan country.

This small Caribbean island is firstly known for having been the birth place of the Rasta movement, and has radiated through its athletic performances in track and field. But the country has above all spread its culture through its sounds. From rocksteady to ska, reggae to dancehall, its musicians have invented and reinvented music to thrill the world.

Its music, its streets,its Clarks and its culture have influenced many clothing styles that still color our urban landscapes today. An influence that many tend to forget. Indeed, streetwear did not wait for the New York B-boys to stroll our streets. Its culture and its codes are in fact the work of this West Indian melting pot.Still untouched and uninfluenced by the U.S., the Jamaicans were far from suspecting that they were going to mark the urban fashion with a style and a culture unique in its kind: The Rude Boys. 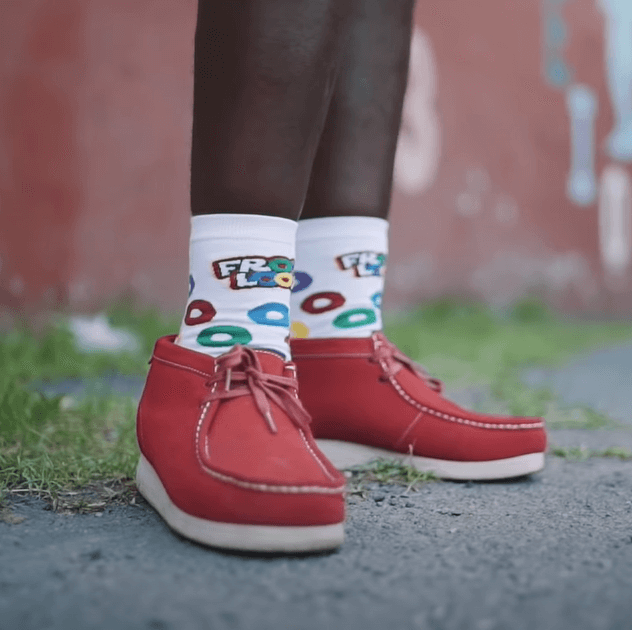 From the beginning of the ’50s, the sound systems appeared on the island, accompanied by this new look to the very clear codes.Born in the ghettos and federated by music, it is first reggae and then dancehall that will make it travel across borders.

Before becoming Bling-bling, the American streetwear was inspired by it, but it is in France that we can still note a marked influence.

The iconic style of the Rude Boys

The Rude Boy’s outfit is made of 4 main elements.

To begin with, every good Rude Boy who respects himself wears a tam. Bob Marley contributed to its international reputation. The Tam, rastafar, rastacap or toppa, is a round cap that serves to maintain the dreadlocks. Appeared in the ’30s, it is first worn religiously by Rastas, and then became generalized to become a marker for the community Rude Boy.

The Ganzie. Worn by the Norwegian army in 1930, then democratized by the Americans with the “health vest”, this mesh vest, nicknamed Ganzie, has become an essential piece of the rude boy. Especially in gangs like the famous Spanglers Posse. This marcel is worn under a shirt with only the collar buttoned.

For the bottom, jeans or cigarette pants, the Rude Boy culture has no emblematic pants. All the subtlety resides in the way to wear it. Pulled up on one side only, decorated often with an open cotton belt, a single obligation to which a Rudy cannot derogate, it is the universal symbol of the rebellion. In all the ghettos, to mark his rejection of Babylon, the Rude boy wears a bandana folded in a pocket and a newspaper in a back pocket to hide a knife, it is the “Rachet knife”.

Then comes the last piece, and not the least. The most important one, the one that has to stay shiny and new. If there is one element that must be remembered in this pack of the good Rude Boy, it is the shoes. But not just any shoes. In the ghetto, there is only one brand that has a word to say: Clarks Originals. Jamaicans are devoted to a real cult to this brand from England.

Desert Boots or Wallabees, no matter the shape or color, once on his feet, a Rude Boy can face anything. But, in the city, to be comfortable in your shoes it is better to consult our Clarks Shoe Size Guide.

But a little advice, do not forget your toothbrush, the nubuck does not like dust.

In Kingston, the Rude boys roam the city and use the Clarks as a sign of recognition. Synonymous with coolness, or badness attribute, the brand is worn by those who want to show where they come from, but with elegance. In fact, we invite you to read our article, full of good advice, to know how to wear Clarks shoes.

In the ghetto it is first a marker of luxury but also of power. Some say that if you don’t wear Clarks on your feet, you have nothing to say. All-terrain pairs, tough and flexible enough to run, the crepe sole has everything to take on the tough Jamaican terrain and suit the look-conscious Rudies.

The crepe sole is then an identity marker, so much so that its wearer risked custody. The Desert Trek model was immediately catalogued as a “robber’s shoes”. In the opinion of the policemen, anyone who can afford such an expensive pair is necessarily a badman.

In the legend of the label, a police raid has remained infamous. One evening in the 60’s, at yet another party organized by the Sir Coxsone Dodd label, known for its feverish sound systems, those wearing the shoes imported from England were separated by the police from those who were not wearing them. Immediately labeled as thugs, the crepe soles were beaten by the officers.

A discrimination that only reinforced the identification with their symbol: turning the stigma around, the rough boys turned it into an object of power and prestige. 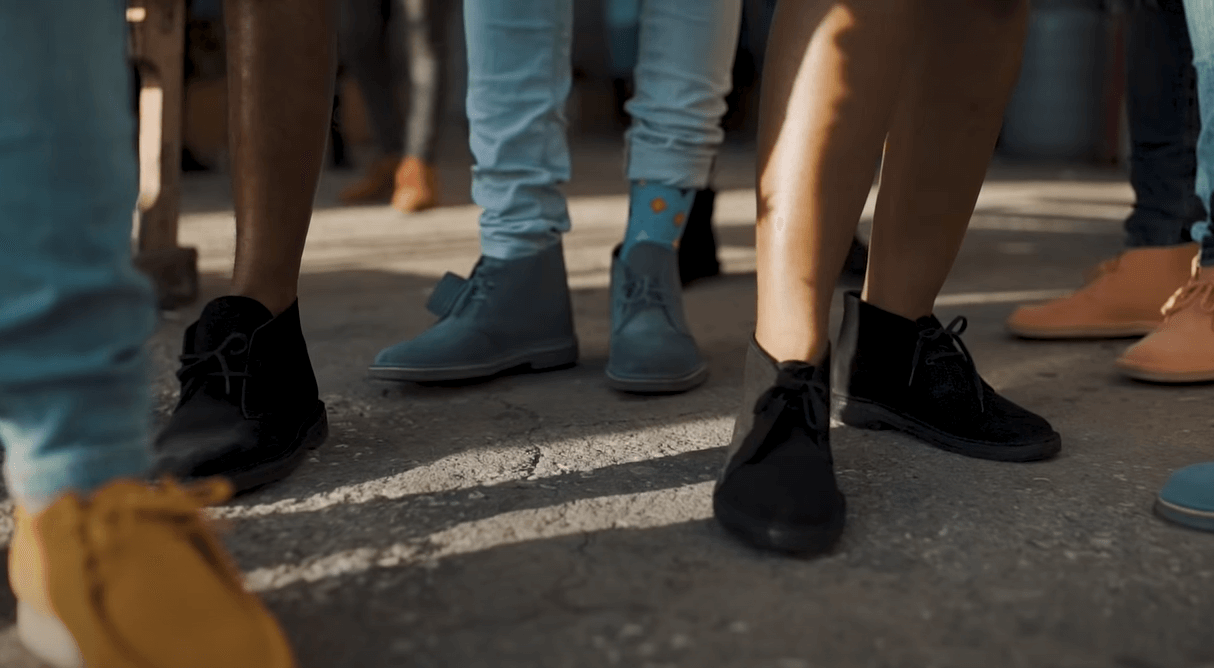 As you can see, from the very first time they stepped foot on Jamaican soil, English shoes have taken a special place in Jamaican culture, and these rough boys have managed to elevate them to the rank of totemic objects. These shoes became so important to the population, that in 1970, following the ban on foreign shoes in Jamaica, secret trade routes between England and the city of Kingston were formed to continue the import.

The British brand has been a mainstay on the island ever since. A popularity and success that has resulted in the most spontaneous and effective product placement in marketing. 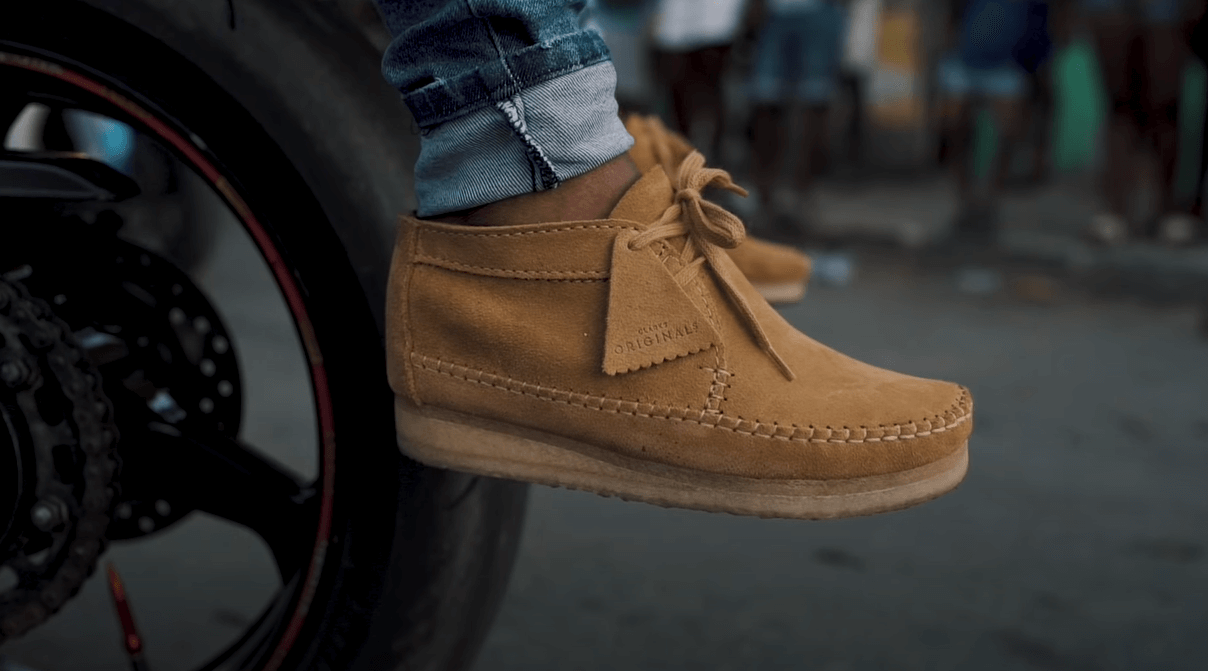 We no longer count the songs with titles in tribute to its glory. Each one of them has a preference for one model or another. Not to mention the album covers displaying these icons religiously aligned.

Given the success of the English brand, Prince Harry, visiting the island, cannot even deviate from the rule, and put on his Desert Boots of blue color.

A relationship that is maintained

To thank the loyalty of its Jamaican consumers, the brand has accumulated several partnerships to support the population, and works for the island’s disadvantaged children. The label has set up a community partnership with Marverley Primary and Junior High School.

The brand continues its trek in Jamaica, notably via Manchester United footballer Raheem Sterling who has a limited edition in his name and also has agreements with artists such as Koffe, Lila Iké and Chonixx.

For this month of March 2021 the brand decided to pay tribute once again to their most loyal Caribbean consumers. The prestigious English brand is releasing a limited edition of its most iconic models in their honor, namely the Wallabee, the Desert Trek, and the Desert boots.

For the occasion these models are renamed Jamaica Bee, Jamaican Trek and Desert Jamaica. They have details in the colors of the Jamaican flag. This Jamaican pack is a well deserved thank you to the Rude Boy community who have been wearing the crepe soles for almost 60 years more proudly than anyone else.