AMI, is this typical masculine French label that is no longer introduced.

Founded in 2011 by Alexandre Mattiussi, AMI Paris, both chic and casual, has become an essential part of the men's wardrobe and is quickly enjoying great success.

Seven years later, it has to be said that the brand also seduces women, the young designer decides to launch his clothing line: Ami l'homme pour la femme was born.

The Graduate team has therefore decided to tell you about this collection that breaks the codes and ideals of the feminine look and attracts the pretty and relaxed woman. 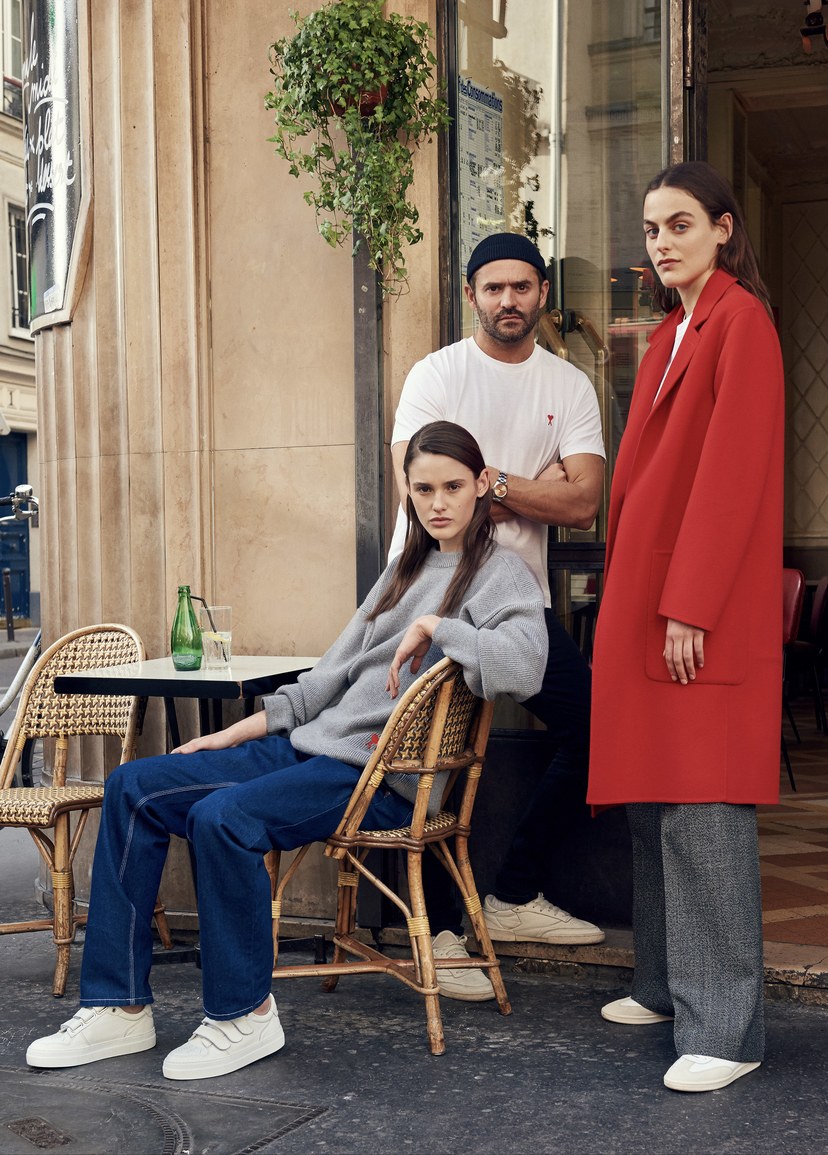 Alexandre Mattuissi created Ami with the idea of creating clothes for his friends, men and women. So he has always imagined his plays on both sexes. The designer began his career at Dior Homme, Marc Jacobs and Givenchy, where he co-led the men's creative team before Riccardo Tisci joined the company.

In 2013, the young designer was the first male fashion designer to win the ANDAM prize, a prize that rewards emerging talents in contemporary design.

The label specializes in unpretentious pieces - from costumes to sportswear, generally all seamlessly mixed - that are distinguished by a touch of high extra-specialty and beautiful unconventional gestures in cutting and manufacturing. 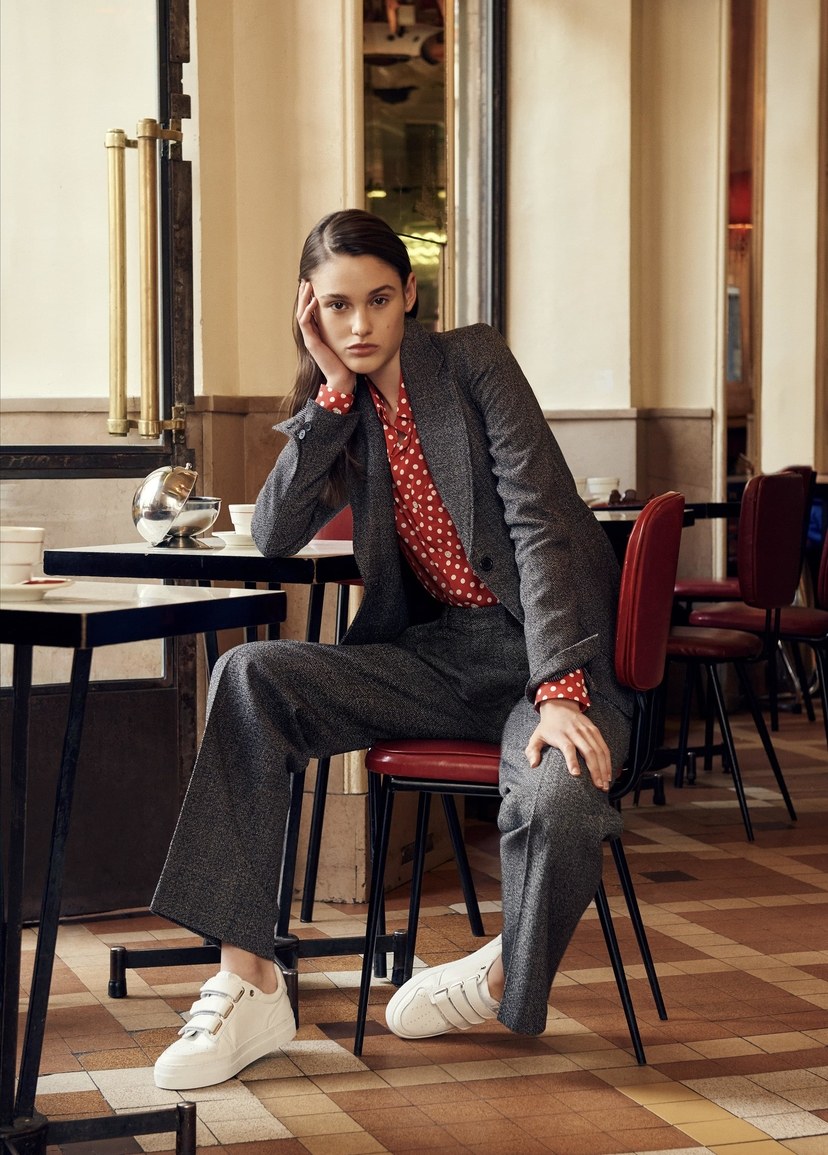 In 2016, he was elected as a new member of the Chambre Syndicale de la mode masculine.

In 2017, the Ami de Coeur line was created, inspired by the letter A that Alexandre Mattuissi drew as a signature for the letters he sent to his friends. From now on, the line is also one of the flagship products created by the company. If you want to learn more about the world of AMI and all that love our article AMI de coeur, a love story goes back over the history of the brand and presents it in detail. 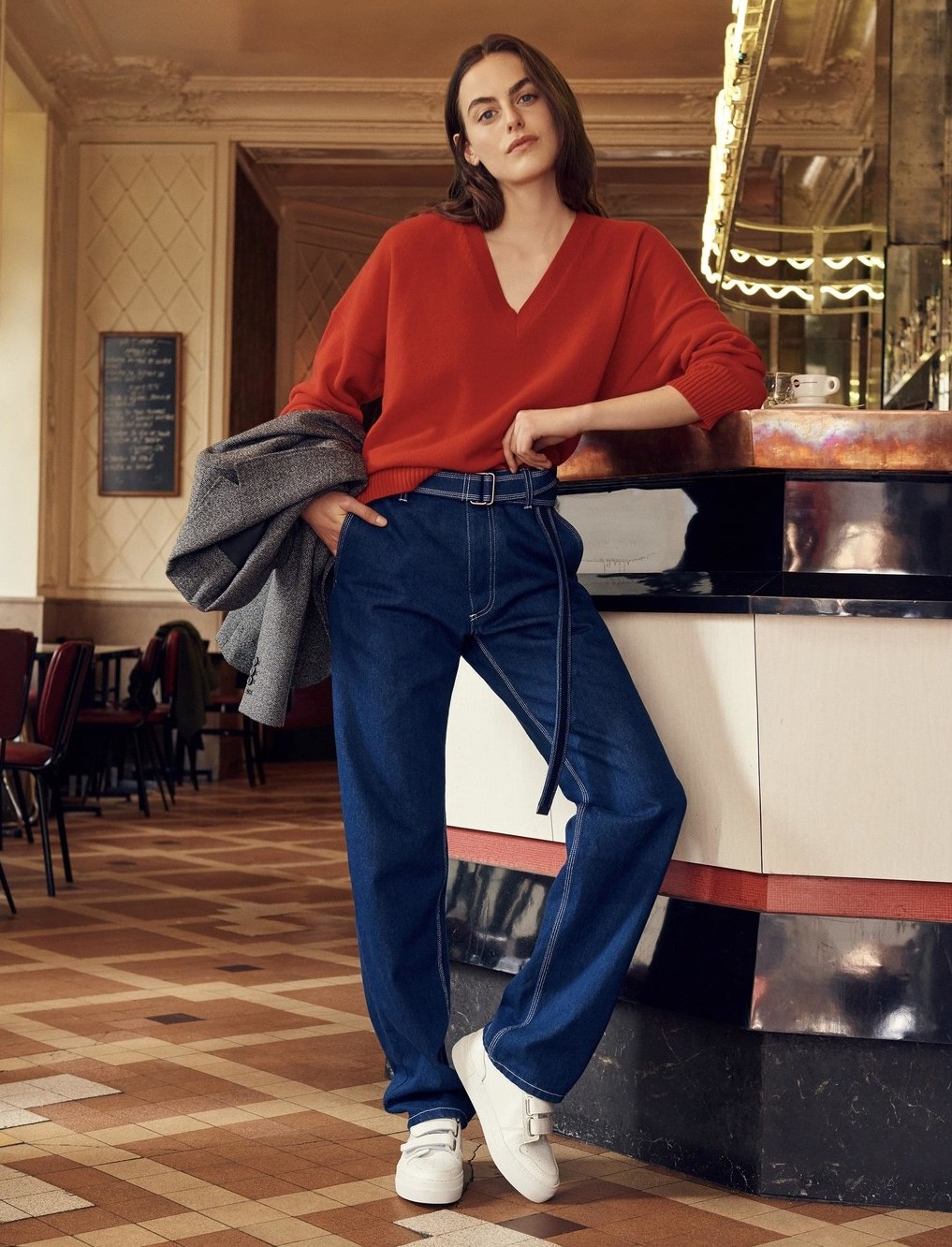 In 2018, we can see that the brand quickly attracted female customers. In Paris, 20% of its customers are women, many of them, of course, buy for men and in Korea, it is one in two customers.

Since the launch of Ami's Fall/Winter 2014 collection, female models have walked alongside male models in its shows during fashion week, dressed in smaller sizes in the brand's men's clothing. Caroline de Maigret was the first to wear reduced versions of her men's collection. 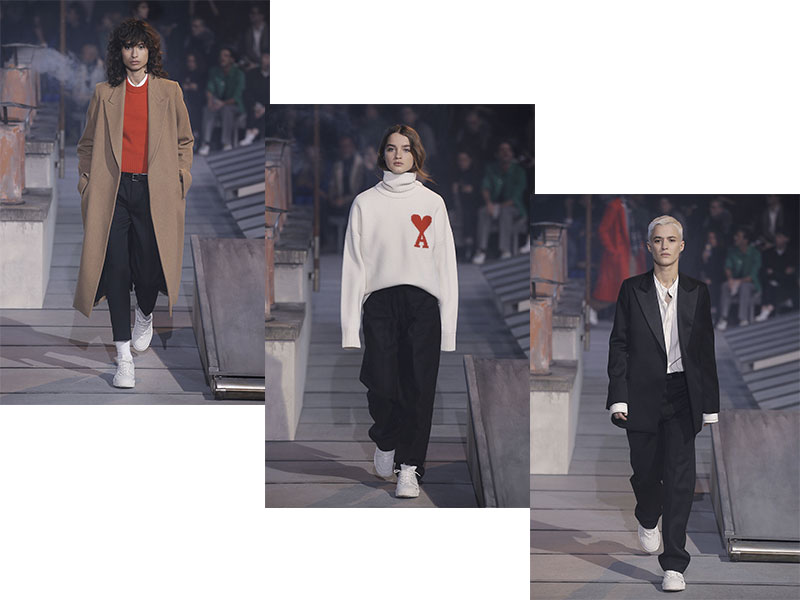 Over the years, the label has succeeded in convincing and seducing women with timeless knitwear sweaters, slightly overly wide but elegant clip trousers and perfectly cut coats. A loyal audience that has been attracted by the brand's "boyfriend style", eye-catching graphics, oversized cuts and unique textures.

The AMI woman, a logical continuation for the brand.

It is from this observation that she came up with the idea of launching a dedicated women's offer.

In October 2018, Ami added a new string to its bow and teamed up with a trading platform to launch its first collection of women's capsules, inspired by the brand's most iconic male models. The concept "Men's clothing for women" was born from an awareness, the brand is not only interested in the creation of men's clothing. 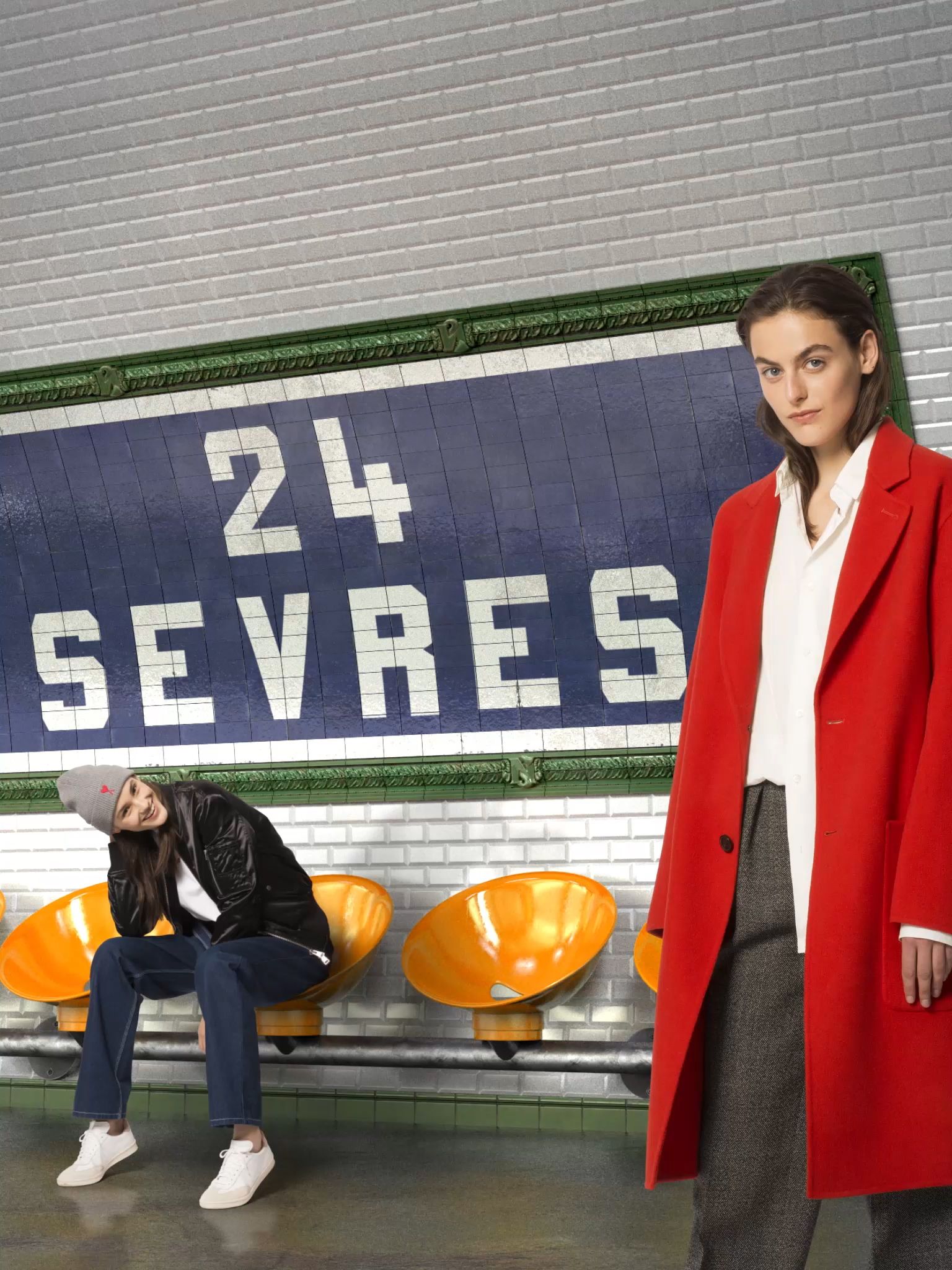 Ami is a brand for men, not unisex or women. But from the beginning, we started to see women coming to the store and start buying the brand," said Nicolas Santi-Weil, Managing Director of Ami.

Rather than a change of direction for Alexandre Mattuissi, this first women's collection is a perfectly logical continuation for his brand AMI, it is in fact a capsule of essentials borrowed from the men's wardrobe and reworked for women, all in a casual and effortless style. 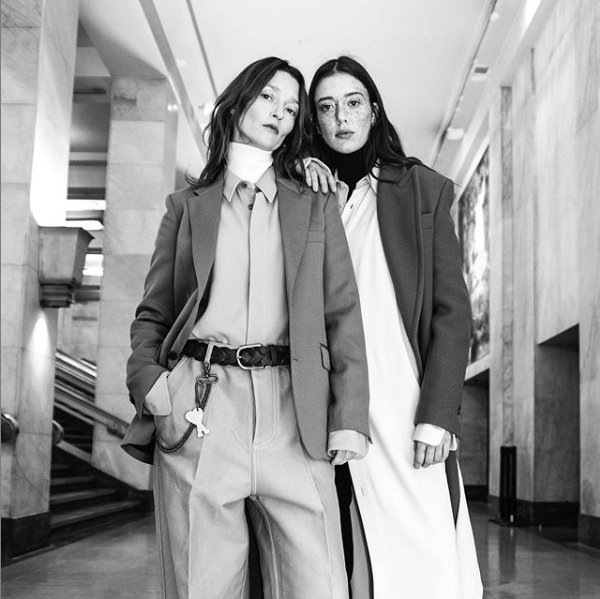 "This line of women's clothing is a natural evolution of AMI's history. I wanted to include women more concretely in my work and I consider[the men's clothing line for women] as a matter of inclusiveness."

The pieces are therefore variations of men's looks. The designer insists on this fact: this new line is not a collection of women's pieces but rather of men's pieces adapted and adjusted to a female silhouette. Indeed, it is this masculine side that mainly attracts this new clientele in search of casual silhouettes with a "boyfriend" style. 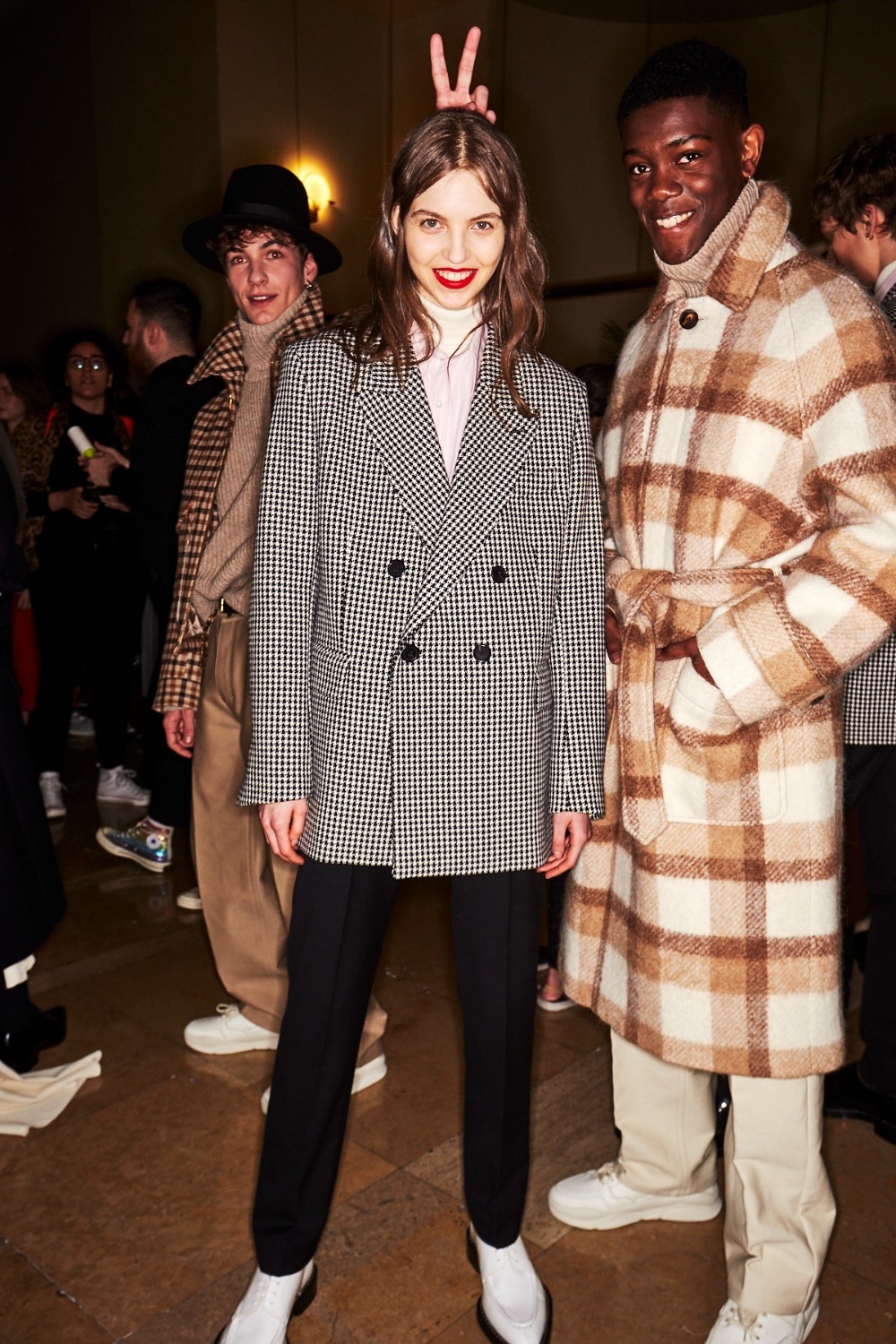 The designer says: I don't yet make a complete collection of women's clothing, at least not yet. But there are many women who work in the studio who like to wear Friend and the number of customers is also increasing, especially due to the trend towards oversizing.

The Parisian department Le Bon Marché even started, a few years ago, to stock smaller Ami parts on its women's ready-to-wear department, so they thought: "Why not?" 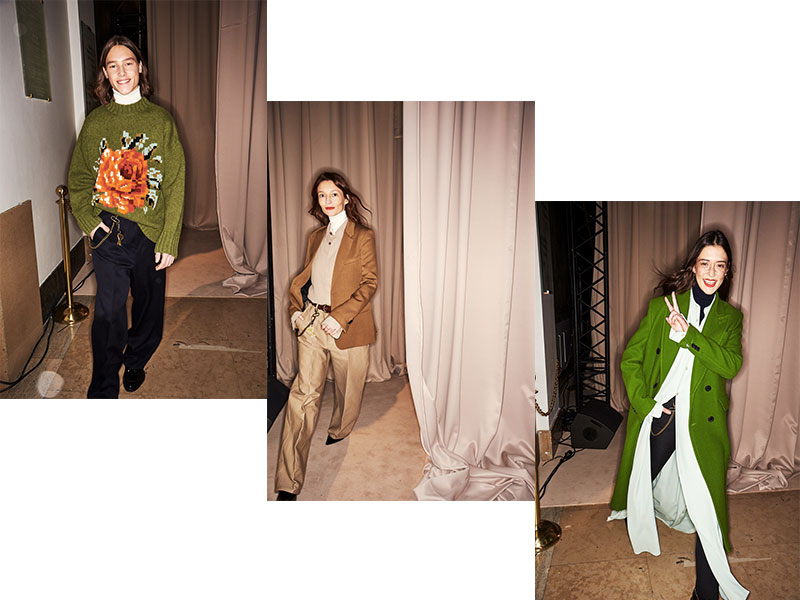 This "man for woman" capsule, autumn 2018, includes 13 ready-to-wear items and accessories typically from Paris. There are silhouettes composed of beautiful, timeless basics that often adorn the dressing rooms of these ladies, including a camel coat, an oversized tuxedo, a leather and sheepskin jacket, a XXL turtleneck, baggy trousers made of jeans or wool.

Alexandre Mattuissi is inspired in particular by the "fresh and spontaneous" style of the Woman assuming her masculine side. As for the colours, think grey, white and also red, one of the designer's favourite shades.

Friends of the Label

For his fashion shows, Alexandre Mattuissi does not choose his muses at random. Among the most famous are Charlotte Le Bon, a female muse with a nonchalant look and also Leila Bekhti with an atypical phyic appearance who became a close friend of the founder. Other famous clients include model Caroline de Maigret, singer Héloïse Letissier of Christine and the Queens, Lise Bourgoin, Adèle Farine, Pénélope Cruz and many others. 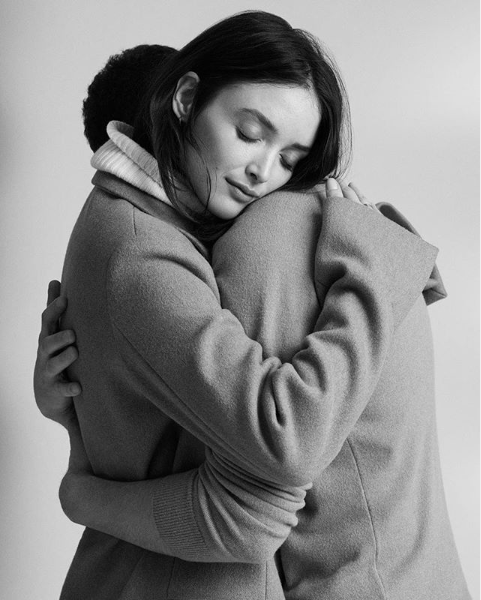 According to A. Mattuissi, L'Homme pour la Femme, in its name, it is like a gift, it is to be at their service. Having many women in his life, many girlfriends, he says he loves their presence, their elegance, their humour....

And even if he does men's fashion, the goal is not to live in a college for boys.... So why not talk to them, most of whom, perhaps thanks to their lovers, already know AMI. 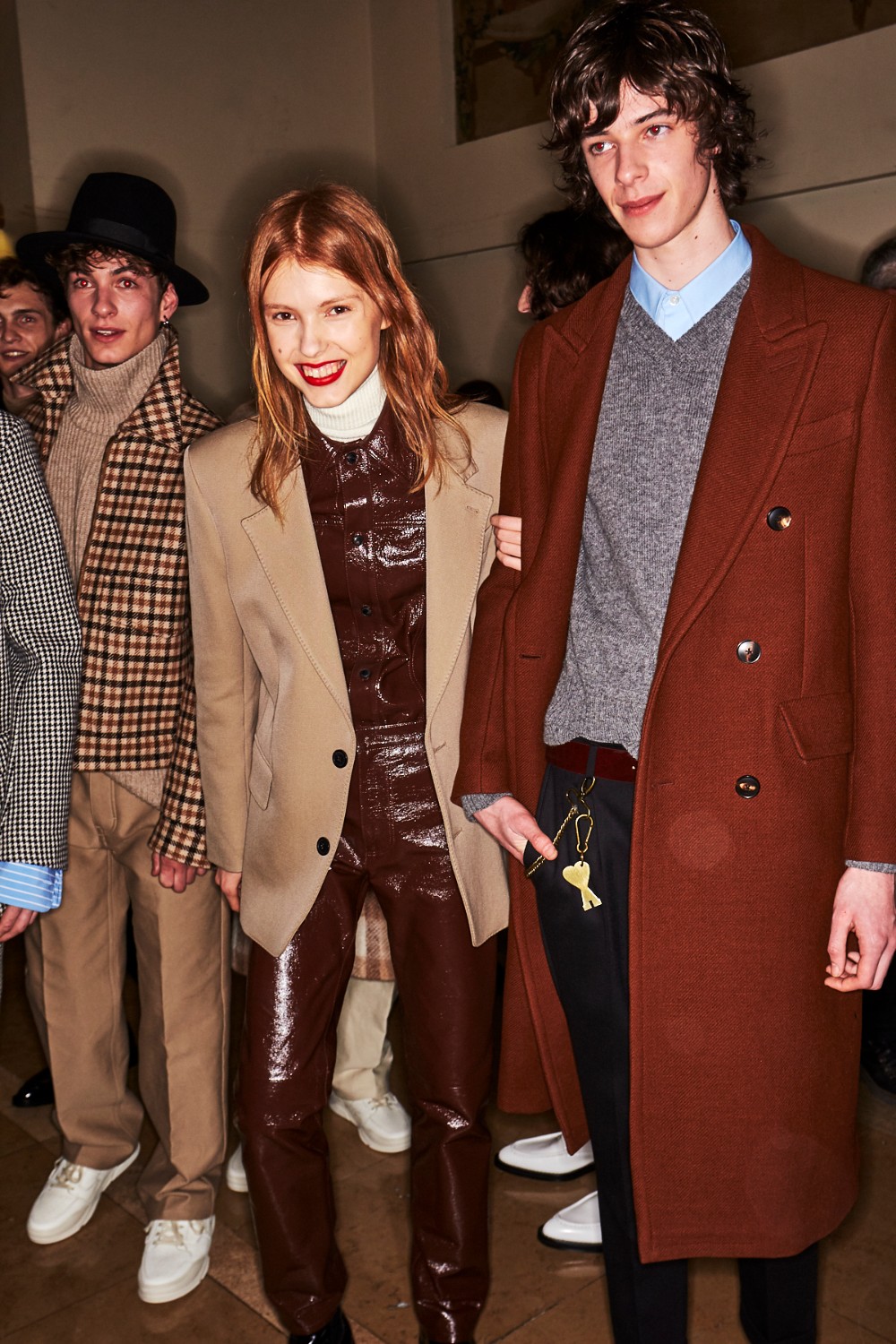 "You shorten pants, you barely take back a shoulder, but it's the same. And, in fact, it works. »

Leïla Bekhti came into in his life four years ago, at a random dinner party. They never discuss fashion or cinema when the two friends meet. They talk about their family, the people they love, the little worries of life and the joys too. 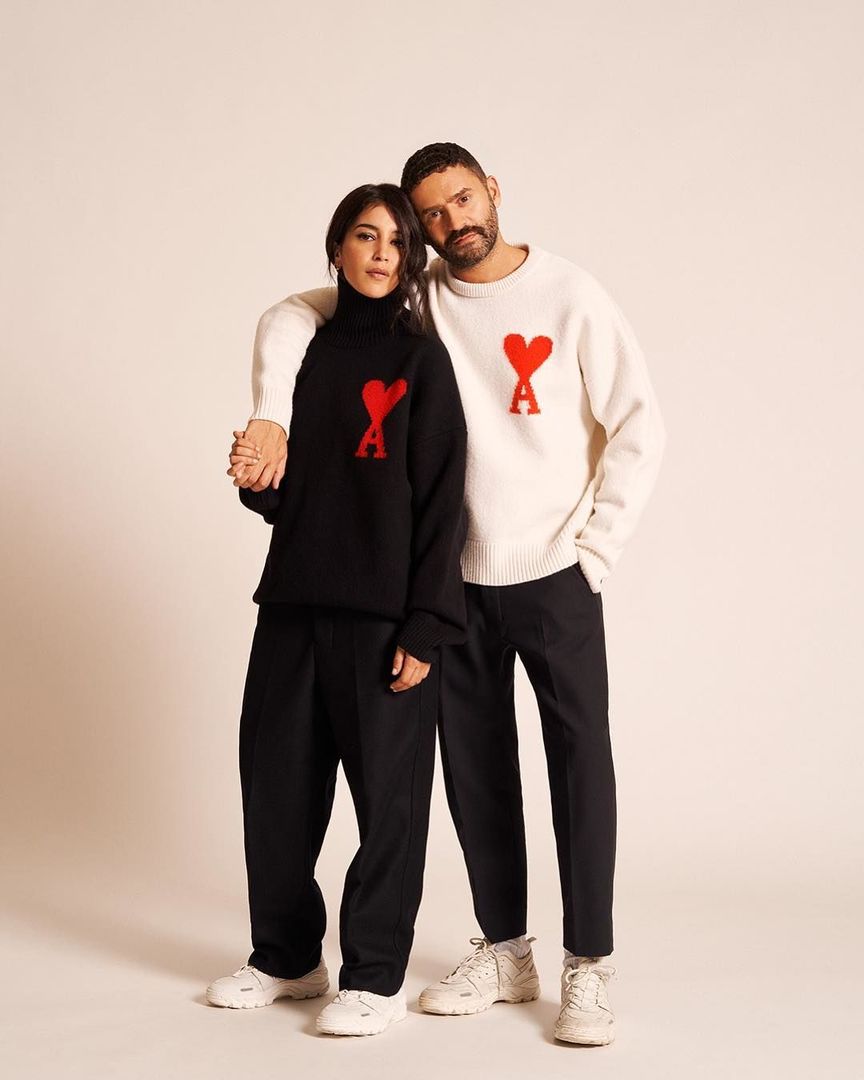 She, so feminine, dresses regularly at home.

"I am not surprised," says Alexandre Mattuissi. Like the women of today, she is whole. We shouldn't even talk about'freedom' when a woman wears a man's suit. But all the same, when I see my friends, so feminine, so pretty, so pretty coming to dress at home, feeling good in a man's outfit, I tell myself that wearing a skirt for a woman is often an act in its own right, they confirm it to me. There is often a salacious and sexist sentence. I tell myself that being sexy is not yet fully accepted."

Alexandre Mattuissi's motto: Men's fashion on a woman's body is about being equal, a way of saying, you won't judge me on my chest or the length of my skirt. It is like another affirmation of character that remains, in the end, very feminine. The loop is closed, AMI, would therefore be like a harmonious circle where Man for Woman could become Woman for Man.

AMI in the world. 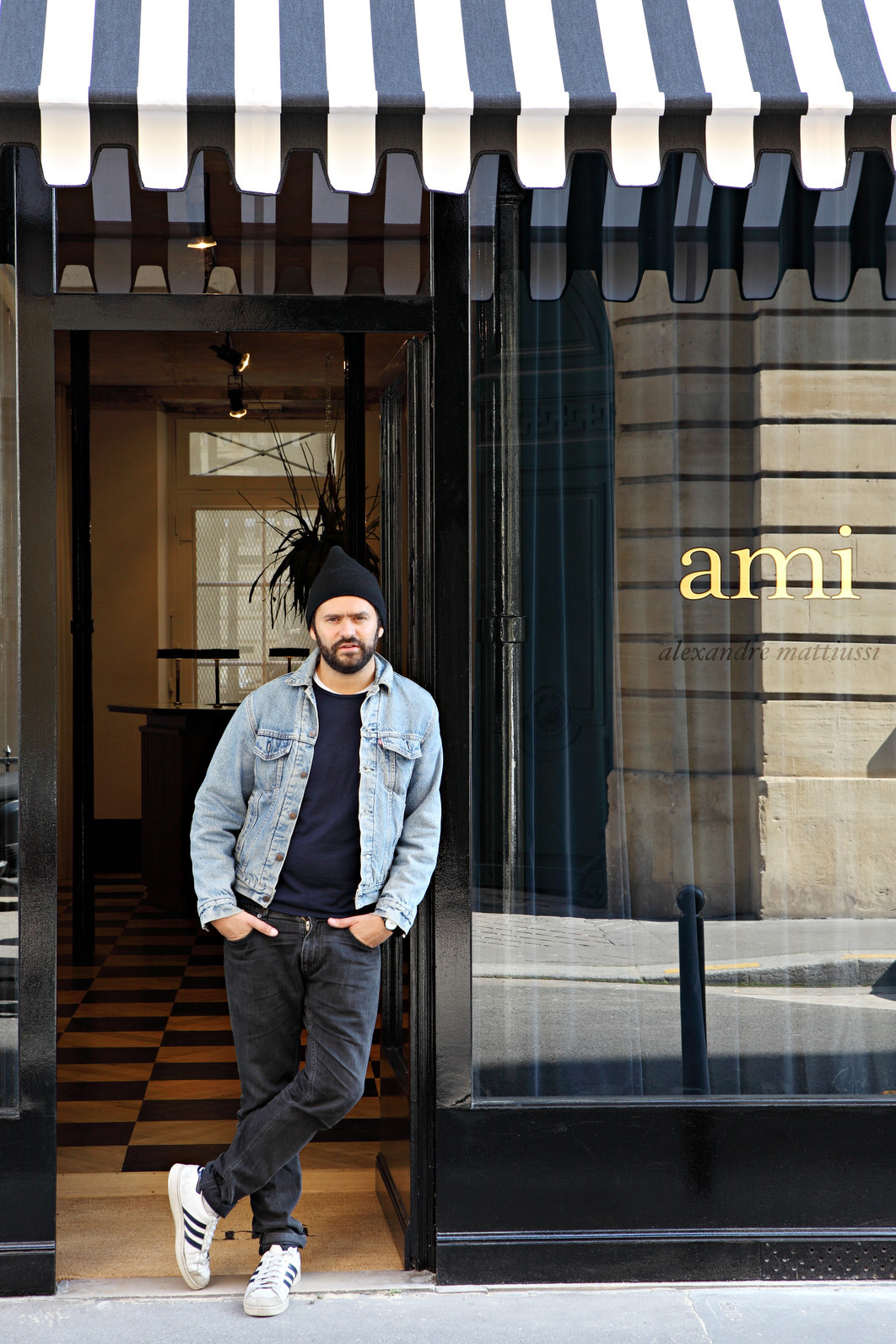 Ami has now six boutiques in Paris, Tokyo, London and Hong Kong, as well as more than 300 sale points worldwide, but its men's product for women will be exclusively available in the brand's boutique, Paris Rue de Grenelle, which has been renovated for the occasion. 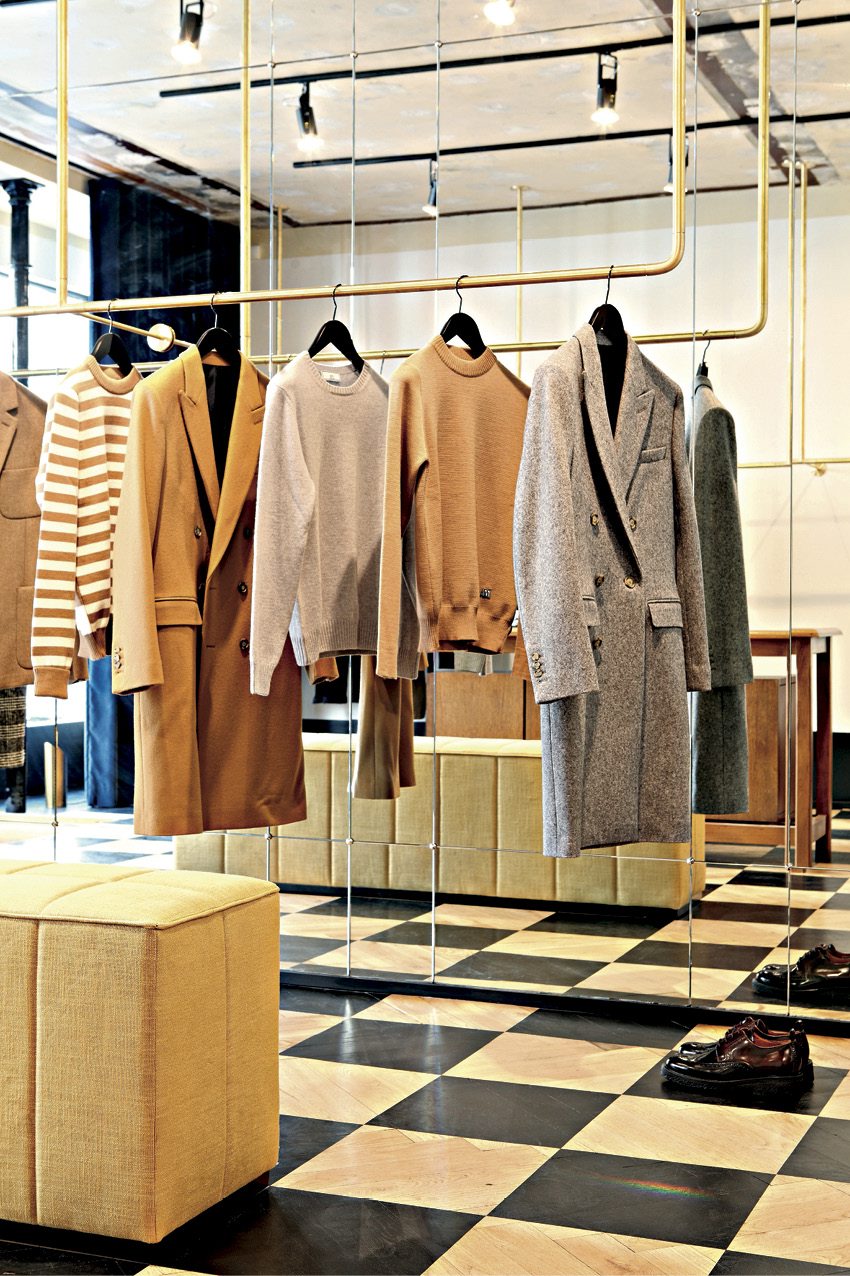 The distribution strategy is conscious, says Mattuissi. He wants to meet the customers and see how they react to it... A winter collection and a summer collection should be a good start to see what she likes and dislikes... This is only the beginning.

Last year, Ami's turnover increased by 50% compared to the previous year. During this period, about 35 to 40 percent of all sales were made by women, according to Santi-Weil. In Korea, this figure was almost 50 percent.

Alexandre Mattuissi, this lover of love and friendship, has developed and adapted his offer, initially exclusively for men, to a female audience. The brand has also attracted a large number of influential personalities, and is now one of the leading brands in the women's cloakroom thanks to its "boyish" cuts that adjust to female proportions.

About the AMI Paris Universe, find our articles :